Art Lessons Can Enrich Your Life

I teach children the basic principles of art in terms of concretes. For example, I guide them to see that a tree leaf is connected to a branch, the branch is connected the trunk , and the tree trunk is rooted in the earth.

When I teach adults, I assume they possess common sense, so my emphasis is more on guiding them to think in terms of abstractions, such as aesthetics and iconography. With adults, a painting can just be a tree leaf without the branch. Furthermore, the painting could merely be a representation of the colors and textures of a leaf, without a concrete image of the object.

Even though some of my younger students have studied art with me for many years, most are still too young for me to discuss abstract concepts with them. However, through painting and drawing, they can learn the skills of critical thinking. For example, I often require them to think what size and placement of the image should be in relation to the size of the canvas. That is a kill of planning management. I encourage the young student to visualize a finished picture before he or she starts to paint. I often encourage a young student to use this kill of visualization to see what he or she will be doing 10 or 20 years from now. Once a young person has such a vision for future, he or she can set his or her current priorities at right places.

In order to be a good artist, I encourage each student to establishing his or her own painting style.

In the higher level art lessons, we discuss composition, rhythm, balance, texture, and even philosophical symbolism in a work of art. Most importantly, I want my students to not only learn art just for art's sake, but also to understand how they can apply the principles of art to their lives, to possess the ability to comprehend and handle challenges beyond the basics.

Now the holidays are behind us. If any of you would like to get yourself motivated and being creative, then give me a call (704-574-1815). I will be glad to invite you to come over to my home studio for a free consultation. If you want to bring a friend to come along please do so. If you prefer email, my email address is: [email protected]

By the way, I would like to encourage all of you to post your comments on this site. I hope we can use this site as a place for communicating with fellow members. Let us read your opinions and suggestions.

We may not have time to meet too often in person, but this is the site where we can meet and chat and be actively involved with the club at any time. I am planning for an in-person club meeting for the agendas we have planned and to answer all the questions you might have. Please feel free to send me all your concerns and suggestions.

If Neither Watercolor Nor Oil Works For You, Then Try Acrylics

If Neither Watercolor Nor Oil Works For You, 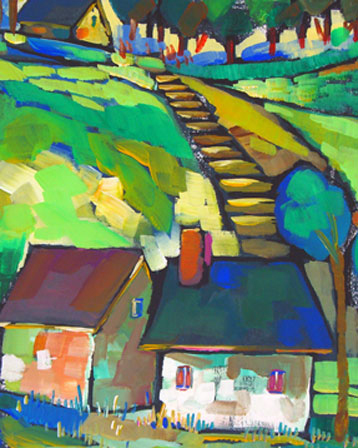 Being a lifelong student of art, I have come to know which artistic medium will be the best one to use for any given project. By the same token, I hope today’s politicians know the best political methods to apply to get the nation back on track.

After listening to Obama’s first press conference, I watched both CNN and Fox News to obtain some commentaries. I found that the arguments among those well spoken reporters and politicians were still centered on a philosophical debate between socialism and capitalism. As a person who has lived in both societies of collective Socialism and Laissez-Faire Capitalism, I have witnessed first-hand the failure of both systems and can fairly state that neither system is compatible with the reality of the 21st Century.

Socialism does not work because its ideology is to make each individual a “screw.” When a machine has only screws and no parts for the whole, it will not work. The old capitalism some how over emphasized individualism and made people became isolated parts that were not assembled to a  machine. When a machine does not have a central synchronizer, it will not operate smoothly. The idealistic philosophies in both systems have no scientific orientation. In small, pre-computer societies, such wishful ideologies sounded logical and seemed to work for a while. When human civilization develops to a highly scientific orientated society in a globalized world, what works in reality is not moved by our subjective wishes or passions, but by the laws of nature. The reality of science gives no excuse to men. It works like a computer. When the logic of computer software is correct, the computer works; otherwise, it gives you “bugs.”

What made China go through its big change was the change in its culture. People started to give up the old ideology of socialism and were willing to absorb new possibilities. This is something people in American need to think about. The focus on the pure numbers of dollars and jobs may not be the optimum solution to the problems in our macro-economic system. To cure the disease in the roots and be patient to wait for the new sprouts to grow is the only way we will have a brighter future; otherwise, we may hit dead ends one after another.

We cannot afford to hold on to out of date ideologies. The world has changed; our ideology needs to change with it. We need a new way of thinking: the old socialism and the old capitalism are both "dead." We need a well-managed and efficient economic system that I call Structuralism. With such a system of free enterprise, individualism is understood as that which can only exist under the premise of a harmonious and efficient society. Under this new system, "freedom" is not abused. Under this new system the concept of "equality" is not misinterpreted as "sameness." People understand what they ought to do rather than what they want to do. We need a vision, a plan for 5 years, 10 years, and 20 years into the future. As an art instructor, I often tell my students that in order to create a good painting, you first need to sketch out the composition and then know the steps that lead to the details. Finally, you need to highlight your painting with a few skillful touches.

I do not know how other people feel about the society we are living in today, but I know for sure that if we do not change the culture by changing the way we think, then we shall see neither the big picture nor the steps to create a better world that we so urgently need.

Start a Free Blog at Webs.com